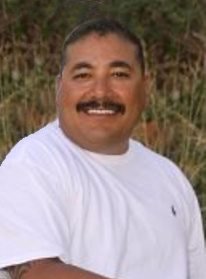 Robert Christopher Trani of St. George, Utah passed away May 10 surrounded by his children.
Chris was born September 5, 1970 to Philip and Rosemary Trani. He was born in California but grew up on the North Shore of Oahu, Hawaii. He is a proud graduate of Kahuku High School and a lover of all things Hawaiian. His skills as a chef were passed down by his father. He is a grill master. He was also an avid motorcyclist and a Harley Davidson enthusiast.
He graduated from the police academy in Utah and served as a Police Officer and Detective for the St. George Police Department for nearly 20 years. He treasured his career as an officer and loved all of his brothers and sisters on the force. Recently, Chris has been an important member of the Red Rock Youth Facility team. He loved his coworkers at Red Rock like he loved his family. He was a funny, caring, and kind man that will be dearly missed.
He is survived by his children Jordan (Megan) Trani, Caitlin (Tyler) Kunz, and Jesse (Hilary) Trani. His Siblings Philip (Esther) Trani III, David (Talishia) Trani, Arnell (Wes) Farnsworth, Arlene Trani, Arlena (Jason) Shuck, and Ardell (Jack) Farr. Chris lived for his family. He is the grandfather of two with another grandson on the way.
Funeral services will be Saturday May 14, 2016 at 1:00 p.m  in the LDS Flood Street Church located at 85 South 400 East, St.George, Utah with a viewing prior to services from 11:30 am to 12:30 p.m.  There will also be a viewing Friday, May 13th, 2016 at Hughes Mortuary from 6:00 to 7:30 pm.

The family requests that in lieu of Flowers donations be made in Rosemary Trani's name to the Cancer Research Institute at www.cancerresearch.org

Arrangements under the care of Hughes Mortuary, 435-674-5000.   Please visit www.hughesmortuary.com for complete funeral listings and to leave condolences.

To send flowers to the family in memory of Robert Christopher Trani, please visit our flower store.
Send a Sympathy Card