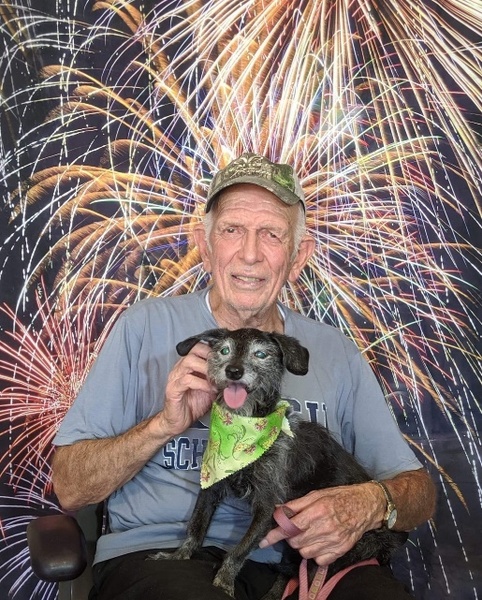 As the sun was rising on Saturday, February 12, 2022, Ronald Walter Gatehouse, 86, peacefully took his last few breaths at the home of his daughter surrounded by family and left this mortal plane on his new exploratory fishing journey into the heavens.  He was born February 1, 1936 in Salt Lake City, Utah to Mavor Frederick Gatehouse and Effie Alice Lee.   He married Margaret Joyce Urry on April 23, 1956, in Salt Lake City, Utah.

“Joe”, as he preferred to be called by his siblings and friends, enjoyed his childhood fishing, hunting and camping in the mountains and hills in the Wasatch Mountains, the Uintahs, the Freemont Range, the Henry Mountains and the Boulder Mountains.  He had many adventures with his siblings and childhood friends, exploring the rivers and streams.  He always had a fishing pole in his hand.  He was full of energy and loved life.

He was a great athlete and especially excelled in track and field.  Being a distance runner, He loved the feel of the wind on his face as he ran the 440 in high school.  He often told the story of how he was running so fast that he blacked out on the last half lap and couldn’t remember how he reached the finish line.

Although they had been in the same class at Olympus High, he first dated Margaret after graduation.  The story of how they met is as follows:  One summer day in 1955 he was looking through the yearbook with a friend who, as they came across Margaret’s photo, told him that she was fun to go out with.  So he called her on the phone to ask her out.  She said “Yes.” It was a true blind date.  They went out to the Great Salt Lake for a church activity.  It wasn’t long after that first date that they were engaged and then married.  Their marriage was later solemnized in the Salt Lake Temple on April 23, 1964.

After getting married Ronald and Margaret lived in a small cottage on 51 East 3900 South, and then in MacAffee’s basement at 2935-15th East while they saved to buy their first home on Larkspur Circle in Sandy in 1961.  They moved to their second home that was built by his brother’s company, Gatehouse Construction, in 1978.

Dad worked in various capacities after he was married, but he never let his work take time away from family activities such as going fishing, doing sports, playing games and reading to his children.  He worked for the State of Utah in the Topography Department before being transferred to the Highway Department where he worked in surveying.  His next position was as an inspector for the materials that were used to build the highways and his final job was inspecting the construction after it had been completed.   During his time at the State, he also worked in construction on weekends or evenings pouring concrete for private individuals.  He had an affinity for printing and started “Rainbow Printing” with a printing press that he set up in the basement of the house.  He printed programs for dance recitals, name cards, church programs and always dreamed of making his original coloring book.

He made his company, RW Concrete Service, after retiring from the State in his 30s and kept very busy in the building industry in Salt Lake.  He did all the concrete work on Motel 6 Salt Lake City, Utah West – Airport at 1990 West North Temple, Salt Lake City, Utah 84116 (801) 364-1053 (just in case you want to stay there sometime).  During the grand opening he took the family to spend one night and swim in the pool.  He also worked at Derk’s Field selling Christmas trees from Thanksgiving to Christmas every year until around 1972, when he bought his own trees to sell and set up a tree lot on State Street next to Arctic Circle in Sandy.

Ronald moved his family to Saint George, Utah in January 1981 after securing a job with an engineering company in Washington County.  He also worked as a printer at the Spectrum and in many aspects of construction including Ence Construction.  He was one of the contractors awarded a bid to work on the remodeling of Dixie Medical Center in the mid-1980s.  He also did the concrete work around the “New” Denny’s at 1215 South Main Street in Saint George (435) 628-6607 (Just in case you want to eat there sometime).  He started “helping out” at “the Bread Store” on St. George Boulevard, and continued working there for years through several management and location changes.

He lived with Margaret in a few different locations in St. George, before settling in Color View Townhomes, just off Dixie Downs Road.

As his family increased in number, he loved supporting his grandchildren at their sporting events.  Baseball, cheerleading, basketball, wrestling, dancing, swimming, cross-country to name a few.  Watching the many plays, concerts and other activities his grandchildren participated in gave him a lust for life that was immeasurable.  He is very proud of and loves dearly each and every one of his grandchildren and great-grandchildren.  They are Grandpa Bear’s greatest legacy.  Through his example and patience he helped instill in each of them a great work ethic and sense of values to remain true to themselves.  He taught them to have love and compassion for others, and to be loyal, kind and honest.

He had many other talents.  He always had a project he was working on whether it was pouring concrete, tying flies or making his famous potato salad or fruit salad (depending on the season) for family get-togethers.  He loved his dogs and his children’s dogs.  He loved bear-claws, fruit cake, ice cream, rhubarb pie and Gatorade. He cared lovingly for his wife of 65 years after she became disabled, taking on all responsibility as her primary care-giver for thirteen years.  Ronald loved to help others.  Whether it be family, friends or strangers.  He was always there to lend a hand on any and every occasion and lived every single day of his life to the fullest.

There was also a spiritual side to Dad that grew as he matured.  Oftentimes, in the morning, if you passed by the dining table you could see him there with his scriptures and priesthood manuals open preparing lessons for the priesthood meeting when he was the High Priest Leader.  He served faithfully as a home teacher, in scouting and many other callings.  He loved to read the Ensign quietly in the afternoon.  He worked to build his testimony, yet was very private about it.  He prayed before every meal, and each night if you walked by the room Mom and Dad were sleeping in you could hear them praying and asking for each of their children, grandchildren and great-grandchildren to be looked after and protected.

To send flowers to the family in memory of Ronald Walter Gatehouse, please visit our flower store.
Send a Sympathy Card