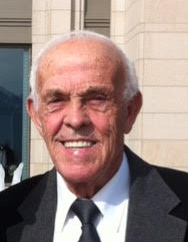 Our dad, grandpa, brother, uncle, and friend, Ronald Dale Sharples, returned home to the loving arms of his sweet wife on July 30, 2017 in St. George, Utah.

Dad was born May 3, 1939 in Murray, Utah to Irene Grace Atkinson and Elmer Steel Sharples. He married Vicky Marian Stones on Aug 10, 1956.  Their marriage was solomenized in the Salt Lake City Temple on Sept 8, 1960.

As a child, dad enjoyed spending time at his grandpa Benjamin Sharples' farm in Emigration Canyon, playing in the dirt and the irrigation canal. His love for the dirt and water were two things he never outgrew and he was fortunate enough to run his own excavation company so he could play every day.  His two biggest loves were Vicky, our mom, and Bertha, his trackhoe. He spent his career proving that there was no job too big for him and Bertha to conquer and his home-life showing how gentle a tough and rugged man could be. Dad considered his wife and five daughters his biggest blessing and enjoyed spending time with us. He was notorious for taking long Sunday drives, most of which involved dirt roads and sometimes even water, but a 4-wheel drive vehicle was never necessary.  He loved dancing, thick steaks, "sloppy" potato salad, and his family.

He is preceded in death by his dear wife, Vicky, his parents, mother and father-in-law, brother Don, sons in law Ben Snow and Bill Martinez.

To send flowers to the family in memory of Ronald Dale Sharples, please visit our flower store.
Send a Sympathy Card