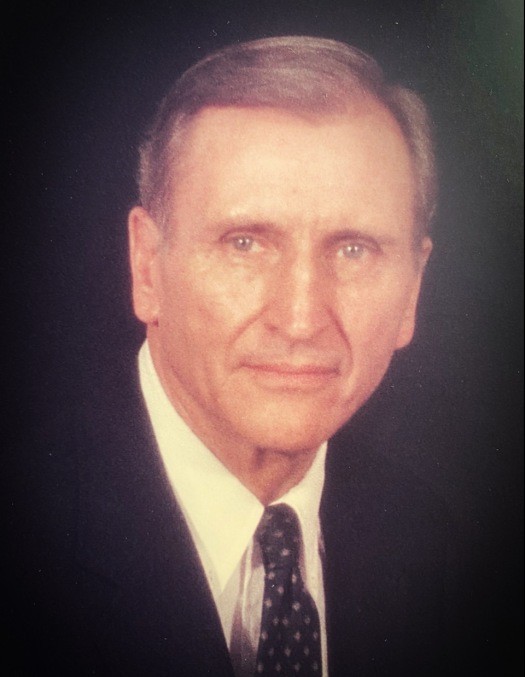 On Tuesday, June 22, 2021, Scott Norman Lee of St. George, Utah passed away at home at the age of 94 after several months of declining health following a stroke.

Scott was born on January 30, 1927 in Brigham City, Utah to Oscar Severin and Lettie Rose Lee.  He attended Box Elder High School where he served as sports editor on the school paper and was a member of the football, track and field, and tennis teams.  He graduated in December of 1944 and quickly joined the U.S. Navy where he attended aviation radio and gunnery schools; World War II ended while he was in training.  From 1950-52 he was called back to serve in a night fighter squadron during the Korean Conflict.  Afterward, Scott served 4 years on the Brigham City Police Department and 11 years on the Utah Highway Patrol.  In 1956, at the advent of his job as a State Trooper, he married Joyce Jeppsen of Mantua, Utah.  The marriage was solemnized in the Logan Temple.

Ten years and 5 children later, the family moved to Buffalo, New York in 1966 where Scott served as Chief of Motor Vehicle Accident Studies at Cornell University’s Aeronautical Laboratory.  He next served as Deputy Highway Safety Coordinator for the State of Arizona followed by 21 years of federal service in Washington, D.C. as a supervisory research physical scientist over systems including the Medical-Engineering Crash Injury Teams and Multidisciplinary Accident Research Studies.  He served on several international collision and injury measurement panels sponsored by the Society of Automotive Engineers, the American Association for Automotive Medicine, the American Medical Association, and the United Nations’ World Health Organization.  He also served as the United States Representative to NATO’s Committee on Challenges of Modern Society to develop and coordinate accident analysis and reporting formats.  During the course of his career, he was instrumental in the research and science behind standardization of seat belts and airbags in automobiles—improvements that have saved countless lives worldwide.  He concluded his career as a federal senior executive and Director of the National Accident Sampling System for the National Highway Traffic Safety Administration.

Subsequent to retirement, Scott worked as an expert witness on collision dynamics and injury causation in California and Utah.  In addition to teaching classes at the Utah State Police Academy, Scott lectured at New York’s Erie County Police Academy and The San Diego Police Academy.  Scott received his bachelors and masters degrees from the University of Oklahoma.  He served in multiple leadership positions in the LDS church, including bishop and stake high councilor.  In later life, he and Joyce served LDS Missions in Chile, in Washington State, and in a Spanish-speaking mission in St. George.  Scott and Joyce were also active volunteers for Historic St. George LIVE! where they served as coordinators for several years.  Most recently, Scott served as Co-Chairman of the Dixie State College Colleagues.

At the age of 92, and at the end of their 62-year marriage, Scott cared for his wife, Joyce, at home before she passed away in April of 2018 after a three year battle with Alzheimer’s.  He is survived by his children and their spouses:  Dr. Jeffrey and Maria Lee of Lubbock, TX; Spencer and Lauren Lee of Santa Fe, NM; Suzanne and Dana Kinnison of Bakersfield, CA; Robyn and Russell Serage of St. George, and; Christopher and Lia Lee of Manassas Park, VA.  Scott had 21 grandchildren and 28 great grandchildren (with 3 more on the way).  His family and friends knew him best for his sense of humor and his confident perseverance in the face of life’s challenges.

Writing poetry was one of Scott’s pleasures in later life, and he has been published in several poetry anthologies.  He held fast to a firm belief in God, which was always his inevitable answer to questions posed in his poetry:

Who guides the course of time?

Who sets the orbits in the sky?

Who struck this fluted line?

Who knows the reason why?

To send flowers to the family in memory of Scott Norman Lee, please visit our flower store.
Send a Sympathy Card