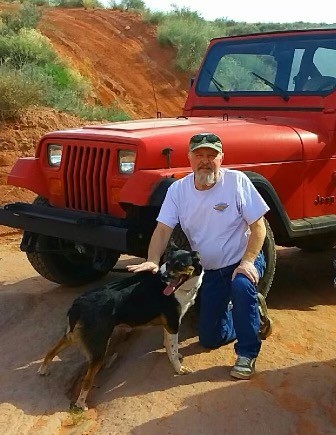 Saint George, UT - Stephen Thompson Wardle unexpectedly passed away from natural causes in his home on Tuesday, November 03, 2020. He was 65 years old and passed after he had spent the day with some of his children and grandchildren.

Stephen also known as Steve, was born in San Bernardino, California on June 07, 1955, to Vernal Dennis Wardle and Mary Evelyn (Thompson) Wardle and was the fifth of six children.  Dad had a wonderful youth which included attending San Bernardino High School and San Bernardino Valley College. He enjoyed all sorts of sports and outdoor adventures from an early age. Camping, swimming, hunting, fishing, and wrestling, to name a few. He also had a love for motorcycles and Ford Mustangs. He would often tell stories of riding motorcycles while growing up in Southern California.

Dad was a member of the Church of Jesus Christ of Latter-Day Saints. He served an honorable mission in Toronto, Canada. He loved the Gospel of Jesus Christ and shared his love for the Savior with everyone he knew.

After his mission, Dad ventured to Southern Utah where he met and married Julie Ann Adams (Howells), now divorced. Together they had four beautiful children, Kellie, Brandon, Cody, and Holly. He was a loving and dedicated father. We all knew his children and now grandchildren were his greatest accomplishment and he was so proud of each one of them. He worked hard as a father and in life, overcoming significant trials and obstacles. He taught his children the value of good, hard work. He shared his love and passion for the outdoors, traveling, and sports with his children by taking them hunting, fishing, and camping, traveling to attend family vacations and reunions, and devotedly attending his children’s games and performances.

Dad had many notable professional titles. He worked as a produce manager for a local grocery store and developed a real skill for picking out the best watermelons. People picking up produce would often go out of their way to request his help because he could find the best watermelons or other fruit. He also worked for a time as a General Manager at Thurston Enterprises, a local construction company. He later worked for Southwest Airlines which aided in his love for traveling. He was involved in many ventures during his life including a brief stint helping promote professional boxer, Samson Po'uha. Whatever he was involved in he was passionate about and always included his children. He took his children many times to the boxing gym to watch and even developed a love for doing boxing workouts himself.

Dad was a major Dodgers fan. He could regularly be seen sporting his blue LA Dodgers hat. His boys loved almost everything he loved. They were all Dodgers fans together and one of the happiest memories they all share was being able to attend a Dodgers game together. It is fitting that he was able to see his Dodgers win one more World Series before his passing. He also loved the Cougars and up until this point in the season, dad was able to watch them be undefeated. I’m sure he is still cheering them on now.

Dad loved his country. He worked his entire life to better his family and his community. He enjoyed attending local community events with his children and grandchildren. He also enjoyed studying the history of our great nation and encouraged all people to read the constitution and to vote.

In lieu of flowers, a donation can be made at any Mountain America Credit Union under the name "Stephen Wardle".

To send flowers to the family in memory of Stephen Thompson Wardle, please visit our flower store.