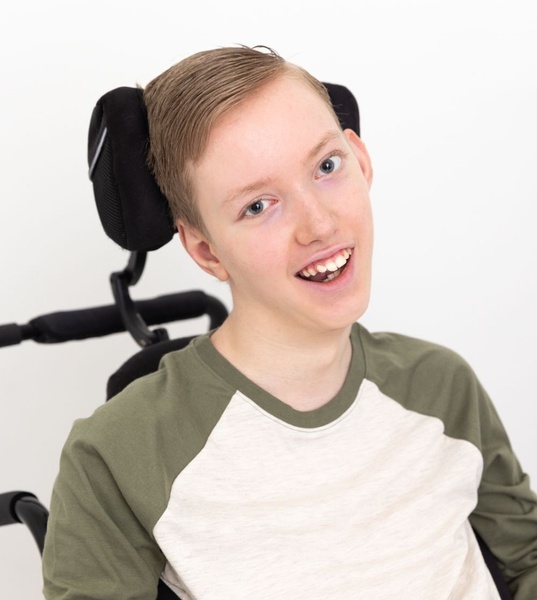 Talen Myrle Vaughn, 15, our perfect angel boy, returned to the arms of his Heavenly Father on Thursday, December 9, 2021, after a weeklong fight against pneumonia. We cannot express how much his angelic spirit will be dearly missed, but we find much comfort knowing that he is surrounded by family members who have passed before him.

Talen was born on September 21, 2006, in St. George, Utah to Jay & Shelly Vaughn. He was welcomed home by his loving big sister Kennedy. Talen was a sweet, smiling baby who captured the hearts of everyone he met. We soon discovered that Talen would be unlike any other typical child. His first year of life was spent doing test after test to figure out why he could not hit the milestones like his peers. Eventually we found out that he had a non-hereditary gene mutation (GNA01). This mutation left him non-verbal, with no head or muscle control, and confined to a wheelchair. Despite his many challenges, Talen was the epitome of a model big brother to his younger brothers, Daxton, and Carter.

Talen loved watching movies, giggling at his brothers’ shenanigans, listening to his sister play piano, and making his family and friends work for a little giggle from him. He could always be counted on for a big smile to brighten your day. Talen was very much a ladies’ man and delighted in flirting with any pretty girl that crossed his path. He had a unique sense of humor and appreciated slapstick comedy. His favorite movie was Ice Age because he enjoyed seeing Sid the Sloth get beat up. Even while sleeping, Talen would grin whenever he heard Michael Scott from “The Office” or Ray Baron from “Everybody loves Raymond.” Talen loved to be social and relished the many friendships he made while attending school.

Talen’s family would like to express their sincere appreciation for the many angels that have been involved in Talen’s care. He had the best school teachers, aides, pediatrician, dentist, neurologists, endocrinologists, rehabilitation specialists, physical therapists, orthopedic surgeons, speech therapists, massage therapist, nurses, ER doctors, pharmacists, and life flight paramedics that we could ever ask for. We will forever be thankful for Primary Children’s Hospital, Dixie Regional Hospital, Red Rock Pediatrics, Dixie Pediatric Dental, Duke University, Shriners Hospital, Riverside Elementary and Fossil Ridge Intermediate. Talen’s last week was spent being cared for by some of the most caring, knowledgeable, loving nurses and doctors. We are endlessly indebted to you for taking such good care of our beloved son.

Talen is survived by his parents Jay & Shelly (Nalder) Vaughn and three siblings Kennedy, Daxton & Carter. He is also survived by two sets of loving grandparents Dallan & Cindy Nalder, and Victor McCard and Robin Vaughn, as well as many beloved cousins, aunts & uncles.

The funeral may be watched at the following link:

To send flowers to the family in memory of Talen Myrle Vaughn, please visit our flower store.
Send a Sympathy Card