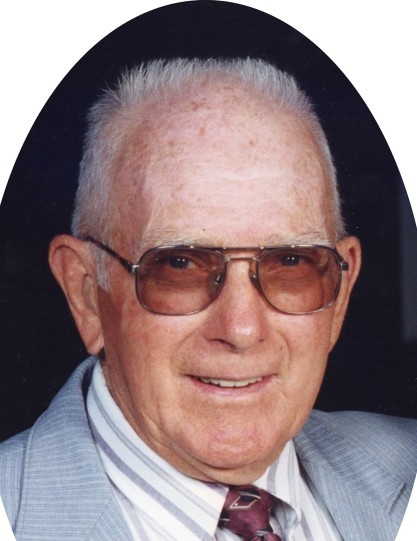 Thomas Eldon Stirling was born November 7, 1922 to David Stirling and Annie Ethel Isom in his grandfather’s home in Hurricane, Utah. He was reared in Leeds, Utah. He met Louise Fluckiger and married her for time and all eternity in the LDS St. George temple on March 27, 1947. He passed away peacefully on March 12, 2018 at his home surrounded by his loved ones. He was 95.

He graduated from Dixie High School in 1941, where he participated in track and enjoyed woodworking. He served in the military during World War II as a member of the 101st Airborne Division.

He was an active member of the Church of Jesus Christ of Latter-Day Saints all his life. He served as a stake missionary, a member of the bishopric, Sunday School presidency, and supervised church farm activities. He also liked to play church softball and he was an avid horseshoe player. He had a green thumb when it came to gardening. He was always sharing tomatoes, corn, squash, etc. with his neighbors. He enjoyed being outdoors, hunting, fishing, and sitting on the front porch. He enjoyed refinishing furniture and restored many beautiful pieces. He served in the community as a member of the local water board and irrigation board.

Funeral services will be Saturday, March 17th at 11:00 AM at the Leeds 1st Ward chapel, 75 N Main, Leeds, Utah, with a viewing to be held at 10:00 AM at the same location. Interment will take place at the Leeds city cemetery.

To send flowers to the family in memory of Thomas Eldon Stirling, please visit our flower store.
Send a Sympathy Card