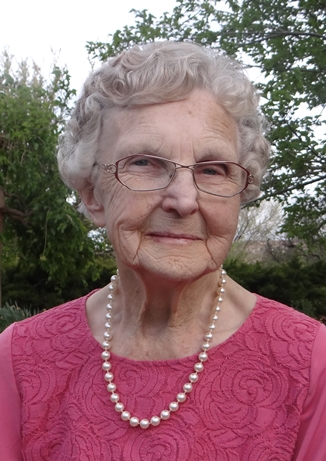 Our beloved wife, mother, sister, grandmother, great-grandmother and friend, Velma Porter Merrill, returned to her heavenly home on October 31, 2015, surrounded by family, in her home in St. George, Utah.

Velma was the fourth child of seven children born to Clarence Nile Porter and Esther Louise Saunders Porter in Blackfoot, Idaho.  When she was almost 13, a new family moved to the area, and she was immediately smitten by one Richard Leonard Merrill. On August 4, 1948, during her senior year in high school, Velma and Richard were married in the LDS Idaho Falls Temple.

Velma was always supportive of Richard’s endeavors. From the time Richard started Merrill’s Carpet & Tile from the den and the garage of their home—which grew to a store on “the Boulevard”—until they retired in 1992, Velma helped run the office and keep the books. However, she only worked while the children were in school, because they were her number one priority. She always loved telling the story about how one child or another would come home from school and shout out, “Mom?” She would answer, “Yes?” And they would say, “Just wondering where you were.”

During the years of operating Merrill’s Carpet & Tile, Velma and Richard were treated to many vacations throughout the world, including Jerusalem, Hawaii, Bahamas, and various European destinations. She really enjoyed this travelling and was often able to take one or more of their children with her and Richard.

Her family and the Gospel of Jesus Christ were not only the center of Velma’s life, they were her life!

Until she could no longer travel, Velma and Richard would attend as many events in the lives of their children, grandchildren, and great-grandchildren as they could, including baby blessings, baptisms, weddings, sporting events, and awards ceremonies.

Velma served in many capacities in the Church of Jesus Christ of Latter-day Saints including Primary teacher, visiting teacher, Relief Society president, and temple worker. From 1993-1995, Velma and Richard served in the Texas, Corpus Christi Mission, where they served in the small town of Beeville, Texas. They also served two missions in the St. George Member Locator Mission, one of which was in the capacity of Mission Coordinators.

Funeral services will be held at the Church of Jesus Christ of Latter-day Saints located at 449 South 300 East, St. George, Utah, on Wednesday, November 4, 2015, at 11:00 am. Viewings will be held Tuesday from 6:00 to 8:00 pm at Hughes Mortuary, 1037 East 700 South, St. George, Utah, and Wednesday from 9:30 to 10:30 am, at the Church prior to the services. All are welcome to attend and celebrate Velma's life. The family would like to thank Amy, Mark, Lexie, and Ashton of Canyon Home Care & Hospice for their loving care during her final months, and all those that have provided flowers, donations, food and kindness.

To send flowers to the family in memory of Velma Porter Merrill, please visit our flower store.
Send a Sympathy Card