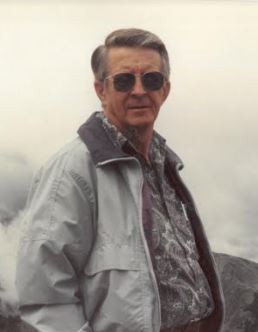 Wallace Franklin Eidahl (Wally) of St. George, Utah passed away peacefully on Monday, April 19, 2021, at the age of 88. He was a beloved husband, father, grandfather and friend.

Wally was born in Ryder, North Dakota on August 3, 1932, to Anton Eidahl and Anna Baasnes Eidahl. The youngest of 5 children, he helped out on his family farm from an early age, creating his strong work ethic and cultivating his inquisitive mind. After high school, he attended the University of North Dakota where he graduated with a degree in electrical engineering. Upon graduation, he joined the United States Air Force and served until 1967 as a Captain working on designing computers. During this time, he married briefly and had 3 beautiful daughters, Patty, Julie and Rachel, residing in St. Paul, Minnesota.

After leaving the Air Force, Wally moved to Utah where he married Lois Romney Eidahl on May 7 th , 1972, happily inheriting 4 more children, Debbie, Lonie, Danny and Danise, and 1 grandchild – a real life “Brady Bunch”. They resided in Sandy, Utah while he continued his work designing computers as an electrical engineer for Unisys. He retired in 1988 and moved to St. George with his wife, where they have spent the last 33 years enjoying their time together.

Always liking to stay busy and holding true to his strong work ethic, retirement did not slow him down and he continued to work at Sears, Lowe’s, and a car dealership until he was 80 years old! Wally filled his days puttering in his garage making beautiful creations out of wood. He loved woodworking, painting, crossword puzzles, playing Scrabble with the grandkids, and later became fond of writing poetry and wit.

Wally led a distinguished life and treasured his children, grandchildren, great grandchildren and his dogs. He was smart as a whip and full of humor. He was the person to go to for car or financial advice and he helped just about every grandchild with math and computer homework. He worked in his shop creating wonderful pieces from whirligigs and clocks to wood cars and furniture, putting his loving touch into his craftsmanship. He will be deeply missed by his family and friends. His stories, his lessons, his laughter and his love will live forever in the hearts of all he held dear.

“When I die, how many will care? How many will know I’m no longer here? I dare to presume family will grieve and praise my good life I do believe. Life will go on, the world will continue, My life will end, friends will miss you” ~ exerpt from a poem by Wally Eidahl. We will miss you Grandpa, and we will think of you every time we smell fresh cut wood, see a book of crossword puzzles, or sit in “grandpa’s chair”. We will sing your praises, cherish your memory and always strive to make you proud. Love you to the moon and back!

To send flowers to the family in memory of Wallace Franklin Eidahl, please visit our flower store.
Send a Sympathy Card