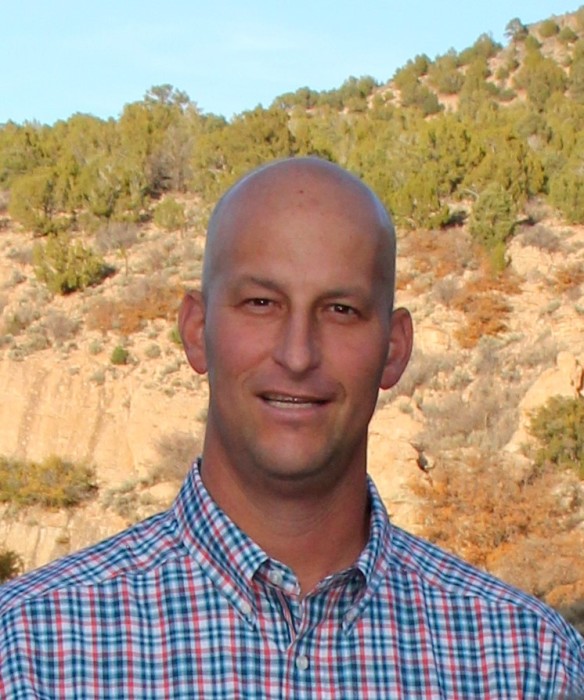 Ward Talbot Holt, loving husband, father, son, and friend to all, passed away on April 18, 2019 after a valiant 2 year battle with cancer surrounded by his family.

Ward was born October 22, 1981, the 8th of 12 children to Anice Talbot and Joseph W. Holt. He was born and raised in Phoenix, Arizona, but for his entire life, he wanted to be a farmer in Enterprise, Utah like generations of Holt men before him. So when he was set up on a blind date with a girl from Enterprise, he started to see his dream come true. After almost 3 years of chasing her, one of the happiest days of his life was on September 23, 2006 when Randi Hunt agreed to be his wife. They were sealed for time and all eternity in the St. George LDS Temple. They made their home in Enterprise, Utah and began their lives together where they were both happy. They are the proud parents of two boys and two girls.

You could always find Ward, as a child, playing in the dirt or “driving” something. His first experience of towing a trailer was when he hooked the family pickup up to his tricycle with a chain. He was determined to pull it down the road. He worked alongside his brothers and his father in the family business and by 8 years old became the best forklift driver in the bunch. He always had a natural ability for driving anything.  He attended schools in Glendale, AZ and graduated from Tolleson Union High School in Buckeye, AZ.

He always had a smile for everyone and loved to laugh. He was able to tell stories about himself and others, and didn’t mind if you laughed at him or with him. He loved the outdoors, camping, riding his 4-wheeler, going to see the trains, going on road trips, driving truck, working on the farm and being with his family.

He was also always looking for ways to be of service to others. If he thought you might benefit from something he had, he would just give it to you. If he was able to help you, he would. Even in his last days, when people would come to see him, he offered to get them a plate of food, even though he couldn’t walk. Ward never thought of it as service though. He was just sharing. He would share everything. Time, talents, money, labor, knowledge, etc. He loved to call his parents and share the news of when the first snow would fall in Enterprise, even if the time difference meant it was 5:00 AM for his mom to answer the phone.

Ward was also the most friendly of his siblings.He was always the one to call family, both immediate and extended family members, on a regular basis. Ward could tell you what cousin was changing careers, whose dog had puppies, which birthday was coming up and what fuel economy someone got on their latest trip. Ward was known for giving 100% effort to any cause or project. He gave the same effort to making and maintaining friendships. Ward considered his friends to be family. He made friends easily, but once you were his friend, he would never let you go. He loved his friends and would often tell stories of escapades he had with them.

Ward has been surprised with all of the people who have recently expressed that he made a positive impact on their lives. People that he only met once, or someone that he was never formally introduced to that just watched him do something for someone else, were touched by Ward’s example and kind heartedness. He always had a smile on his face.  He had hearty laugh and was happy to tease or be teased. He happily answered to Tractor Ward or Tater, but especially liked being called Dad.

Ward was a lifelong member of the Church of Jesus Christ of Latter-Day Saints. He served as a missionary in the Pennsylvania Harrisburg mission and was grateful for the opportunity to serve.

In lieu of flowers, there is an account set up at Zions Bank, under the name of Ward and Randi Holt.

Arrangements are made under the direction of Hughes Mortuary, 435-674-5000

To send flowers to the family in memory of Ward Talbot Holt, please visit our flower store.
Send a Sympathy Card