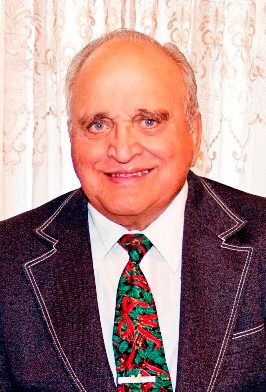 Wayne D Eckman passed away peacefully at home on Sunday, February 21, 2016, following complications with kidney failure and esophageal cancer. He and his identical twin brother, Blaine, were born in Murray, UT, to Roy Waldamer and Gladys Treganna Dayton Eckman on September 18, 1930. They were the 5th and 6th of nine children.

As a young man, Wayne acquired a strong work ethic by delivering newspapers, picking peaches, and cleaning chicken coops. He grew up loving sports, especially baseball, and enjoyed playing catcher for various teams. From his youth, Wayne was active in the LDS Church. He and Blaine served missions in Sweden (their father's ancestral home) from 1950 to 1953.

After his mission, Wayne met Paralee "Pal" Miles on a blind date. Shortly thereafter, he was drafted into the U.S. Army and served in Austria and Germany. Upon his return, Wayne and Pal married in the St. George Temple on September 24, 1955. Wayne attended Dixie College for one year and finished his education degree in 1959 from Utah State University. He later earned a Master's Degree in Education at Brigham Young University and had a part-time job teaching at the Utah State Prison. He taught school for 32 years, primarily in the 5th and 6th grades, for Jordan School District and finished his last decade in St. George, Utah.

From 1956 through the early 1990's, Wayne and Pal were busy raising nine children. During those years, Wayne also coached hundreds of boys and young men in basketball and baseball, both in the community and for the LDS Church. He served in many church callings including: teaching positions, bishop's counselor, high council member, and ward and stake missionary. He especially loved missionary work and often gave copies of the Book of Mormon to others. After his retirement, Wayne and Pal served two missions together in Sweden and Connecticut.

As a church service missionary, Wayne learned how to index, a process of digitizing names from microfilm for use in LDS family history research and temple work. At the time of his passing, he had indexed 685,000 names and arbitrated 73,000. He also served as an ordinance worker in the St. George Temple for 13 years.

The family wishes to express appreciation to the doctors and medical staff of Liberty Dialysis and Community Nursing Services, who became great friends and made his last few months very pleasant.

To send flowers to the family in memory of Wayne D Eckman, please visit our flower store.
Send a Sympathy Card