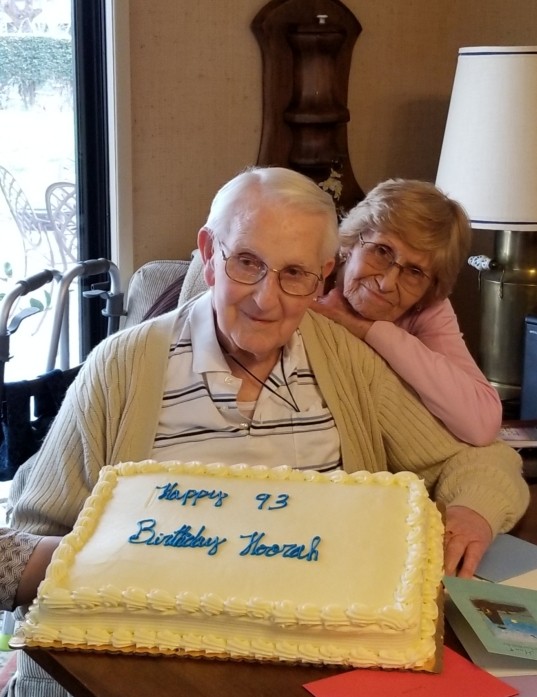 Willard Howarth Ostler, Jr. was born on March 1, 1926 in Kane County, Wyoming to Ethel  Marguerite Byrd Ostler and Willard Howarth Ostler.  He was the second child in a family of six children.  He has an older brother, Fred, and his younger siblings are Dick, Carolyn, Jim, and Dave.

As a child, his family lived in Lovell, Thermopolis and Greybull, Wyoming, and Salt Lake City, Utah.  In 1937 when Willard was 11 years old, they settled in Pocatello, Idaho.  That is where the Ostlers were living when they received the four-star telegram that their son, Fred, had been killed in France when his plane was shot down.  Fred was in the Army Air Corp.  Willard enlisted in the Army Air Corp, too, but was discharged when they found a calcified TB spot on his lungs.

Willard graduated from Pocatello High School in 1944. He went to college at the University of Idaho Southern Branch starting in the spring semester of 1945. On July 6, 1946, he married Patricia Smith in Bozeman, Montana.  They had two children in Pocatello -  Michael, born in 1947 and Sue, born in 1948.

Willard spent the first years of his marriage working for his father who started a business in Pocatello called Ostler Glass and Paint.  In 1957, he moved his family to So. California to learn how to hang wallpaper.  He had an extraordinary talent for wallpapering and leaves a legacy of people he mentored in that business, including his son, brothers, nephews, niece, cousins and others.

After Willard and Pat were divorced in 1961, he met the love of his life, Heather Lea Cynthia Cammidge, on April 11, 1964.  Heather had a cute little girl, Lisa, who was four years old. Willard helped Heather raise Lisa from that time on.  Heather has been Willard’s constant companion and support since the day they met; and she was his caregiver the last four months of his life.

Willard and Heather lived in Culver City when they were first married.  In October, 1975, they moved to Palos Verdes.  Then in July of 1987, they moved to Mira Loma, California into a new tract of homes that sat on half-acre lots so that Willard could build a shop where he restored his 1938 Ford. Moving to Mira Loma was a great blessing as they became active in car clubs and made many friends, including wonderful neighbors. In 2015, Willard and Heather were baptized into the Church of Jesus Christ of Latter-day Saints. A year later, they were sealed for time and all eternity in the Redland California Temple.

Willard was loved and admired by all who know him.  One of his peer professionals wrote this about him:  “Willard Ostler gets the project done right; with exemplary installation skills, with a perfectionist’s attention to detail and thirty years of experience to apply to the job  And he gets the project done on time: considerate of other sub-contractors schedules, complying with deadlines, in a quiet and courteous manner.”  Considerate, quiet and courteous perfectly describe Willard.

Willard is survived by his wife, Heather and their three children:  Michael Howarth Ostler (Vickie), Sue Ostler Kester (Henry) and Lisa Ostler Adams.  He is also survived by eight grandchildren and eighteen great grandchildren. He is preceded in death by his parents, his brother, Fred, and his brother, Dick.

Services will be held on the following dates:  A memorial service will be held Tuesday August 13th at 1:00 pm in the Church of Jesus Christ of Latter Day Saints stake center located at 5950 Serendipity, Riverside CA.

Funeral services will be held in St. George, Utah on Saturday August 17th at 9:00 am in the Green Valley Stake Center located 511 South Valley View Drive with interment to follow services in the St. George City Cemetery.

To send flowers to the family in memory of Willard Howarth Ostler Jr., please visit our flower store.
Send a Sympathy Card