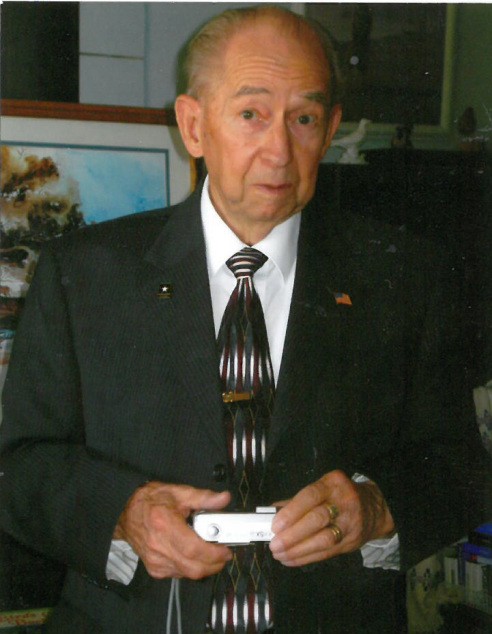 Willis John Brown, Jr. was asleep during the early morning hours when he returned to Heavenly Father on Sunday February 18, 2018.  He had been fighting his battle with cancer for a year.

Willis was born 27 September 1928 to Willis John Brown and Marie Victoria Stotts in Long Beach California. He is the oldest of 7 brothers and 2 sisters.  Willis, Senior, was discharged from the Navy, and settled his family in Northern California where his roots were.

Willis "Bud" Brown married Billie Jean Finley in Reno, Nevada March 1951.  While he was in the Army in Korea, his son, Johnny Lynn Brown was born.  At the end of his service, he returned to the Elk Grove Village area.  Two more children were born to Bud and Billie, and with a job change, they transferred to Phoenix, Arizona.

Previous to the Arizona move, the family met the members of the Church of Jesus Christ of Latter Day Saints.  They were baptized and confirmed, in California, and then started their church service in Arizona.  They met and served many friends over their years of Church service.  After High School graduation in  Phoenix, the three children all joined the Navy.  John and Denise each served 4 years while Michael served 20 years.   Michael and his wife Sharon and children live in Southern California.  John and his wife Susan, and children, live in Surprise Arizona, and Denise lives with her family, children and grandchildren, in Phoenix.

Willis "Bud" transferred with the United States Government Food Inspection to the Bear Lake area in Laketown, Utah in Rich County.  His loving wife, Billie, had a losing battle with cancer at the young age of 47 while they were living there.

Willis often attended training by the government outside of Utah to further his abilities.  Willis and Billie enjoyed seeing different parts of the country on those trainings.

Three years later, Willis applied for a transfer out of the cold area to Salt Lake City. Willis served a total of 23 years with the Federal Government as a Food Safety Inspector.  His previous employment in California was in food inspection with Campbell Soup.  Willis also was a highly trained tile setter.

Willis "Bud" Brown has served as a stake missionary, a financial clerk, a baptistery director in the Jordan and St George Temples.  He has also performed many baptisms in the temples.

After retirement from the government, Bud and Shirley managed an Independent Living home for 16 apartments.  They were "on call" all the time!  The next best alternative was to go to Yellowstone Park for jobs as retail employees from May 15 to October 15.  Life was close to the buffalo and the eagles.

The St. George area, with its warmer weather and various retail jobs available, became their home with lots of good people around all the time. Bud worked at Wal Mart and the Temple Visitor's Center as well as the County Senior Center.

Willis and Shirley became Elder and Sister to serve in the historic sites mission for about 30 months.  It was so exciting to meet people from around the world.  Bud especially was a good listener, and he gave away a lot of Books of Mormon.  They also served as Member Locators, to help people who had moved from their local wards, custodian at the Temple Visitor's Center, and delivering Meals on Wheels and other jobs at the Senior Center.

Willis "Bud" really enjoyed sports, from coaching Little League, to bowling, to horseshoe pitching and Table Tennis at the Senior Games.  He liked to win, but the challenges were worth participation.  He also enjoyed the friendships he gained from his sports activities.

Willis "Bud" had a great sense of humor right to the last month.

He loved everyone, and was loved by all of his co-workers and competitors.  His kindnesses are well known.

Funeral services will be held on Monday, February 26, 2018 in the Santa Clara LDS Chapel located at 1740 Desert Dawn Drive, Santa Clara, Utah at 11:00 a.m. Interment will follow directley after the service at the Santa Clara City Cemetery.

To send flowers to the family in memory of Willis John Brown Jr., please visit our flower store.
Send a Sympathy Card